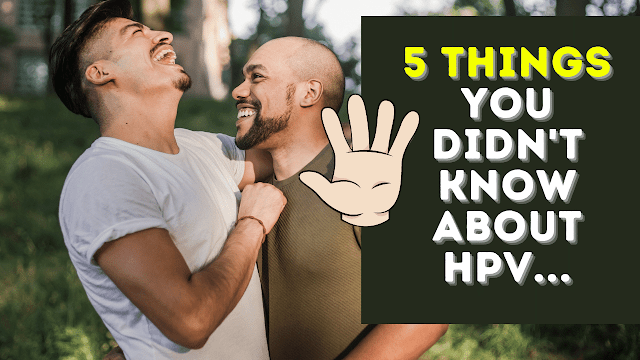 If you’re s**xually active, you probably know that there are many sexually transmitted infections (STIs) out there that can have major consequences if left untreated.

Perhaps the most common STI, though, is the human papillomavirus (HPV). This virus causes at least 90% of cervical cancers and genital warts in men and women, so it’s important to be educated about this infection and how to keep yourself safe from it. Here are five things you may not have known about HPV.

1) The virus can affect men, too

While it’s most commonly associated with women, men can also be infected with certain strains of human papillomavirus.
In fact, according to data from Dr Li, between 20 and 30 per cent of newly diagnosed cases of genital warts in young men are due to HPV 16—the strain most associated with cervical cancer in women. Plus, more recent data has revealed that around 6 percent of penile cancers are caused by HPV, specifically types 16 and 18.
The rates might not be as high as for cervical cancer in women, but for some groups—including African American men and those who have s*x with other men—they can be even higher than that.

These are two of six strains that, when combined with smoking and other factors, cause about 70 per cent of cervical cancers.
The other four strains also can cause cancer, though at a lower rate. It’s estimated that these four account for 30 per cent of cases. Every year, about 12,000 women in America get cervical cancer. Of those women, almost 4,000 will die from it – typically because they have not had access to good medical care.
More than 15 million Americans are infected with genital human papillomavirus (HPV), and roughly half don’t even know it since there are no obvious symptoms.

3) A positive result doesn’t mean you have cancer

There are more than 100 strains of HPV, and most are harmless. In fact, it’s estimated that at least half of s**xually active people contract some strain in their lifetime, according to David Dardick, M.D., assistant professor of obstetrics and gynaecology at New York University School of Medicine.
Most strains don’t cause any symptoms—and if they do, you probably won’t know until a precancerous lesion appears or cancer develops. That’s why getting screened regularly is so important.
Talk to your doctor about what makes sense for you—screening may start around age 30 but can begin as early as age 21.

To get tested for HPV, your doctor will order a Pap smear. During a Pap smear, a doctor or nurse inserts a speculum into your vagina and scrapes cells from your cervix with a spatula or brush.
The cells are then examined under a microscope to look for abnormal cell changes that may lead to cervical cancer.
Most doctors perform routine screenings every three years for women between ages 21 and 65, so you probably don’t need to ask your doctor if you can get tested now.

5) Early detection makes all the difference

While most men and women infected with human papillomavirus (HPV) never show symptoms, when an individual does have symptoms, they can include warts on or around genitals or anus.
Many types of HPV do not cause any symptoms and are often transmitted unknowingly; but these latent infections can cause problems in both men and women later in life. Genital warts usually appear as a small bump or group of bumps in the genital area. While there is no cure for genital warts, they often go away on their own within a few months to a year.
However, they can come back even years later. Cervical cancer: In some cases, persistent infection with certain strains of HPV can lead to cervical cancer if left undetected and untreated over time.